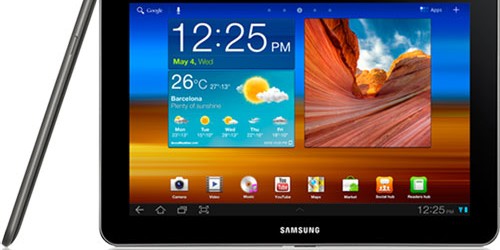 There’s no doubt I’m a bit of a gadget freak. Not many things make me happier than new toys.

I saw the new 10″ Samsung Galaxy tablet in a shopping centre display in Krakow and got a bit hot and bothered over it – not surprising as in the last two or so years I’ve become a bit of an Android fanatic. I decided that IT WILL BE MINE and hatched an elaborate plan to work 15 hours in the following week to pay for it (that’s how my life works now, when I want extra toys, I just do some work).

Problem was they were kinda in short supply so when I saw one in our local Media Markt I snapped it up – kinda advanced myself the cash, if you will. They only had one, and only the 16GB model – but it was 3G so I figured that I’d be able to cope with the smaller capacity. It was either that or possibly not get one for weeks or months.

I took it home and if it had been love at first sight, my new gizmo and I quickly cemented the relationship. Basically it’s awesome. Everything was peachy right out of the box. Wifi was going in 3 minutes flat, I chucked in a SIM card and one reboot later we were surfing the net. A friend mentioned that the one he’d played with in a store was slow and sluggish –  but i guess that must have been the result of being messed about with in the shop because mine is quick and snappy. I downloaded a few of my favourite Android apps and was very impressed with everything. Not all apps will scale up to tablet size but those that do look really cool.

Of course, if you live in Germany you are out of luck, at least for now – Apple won their court case and it’s blocked from sale permanently, although Samsung are counter-suing or something so they might be back. There’s a temporary injunction in Australia at the moment. They’re still available in other EU countries so as the guy sitting next to me on the train between Hannover and Berlin the other morning said, it’s easy enough to pop over the border to get one (and after playing with mine and bitching about  how much he hates iTunes, I suspect he might just do that).

This is less of a review and more of a pooling of drool on the screen, I know. But I’m keen to finish writing and get back to reading RSS feeds and watching YouTube on the couch with my gizmo.